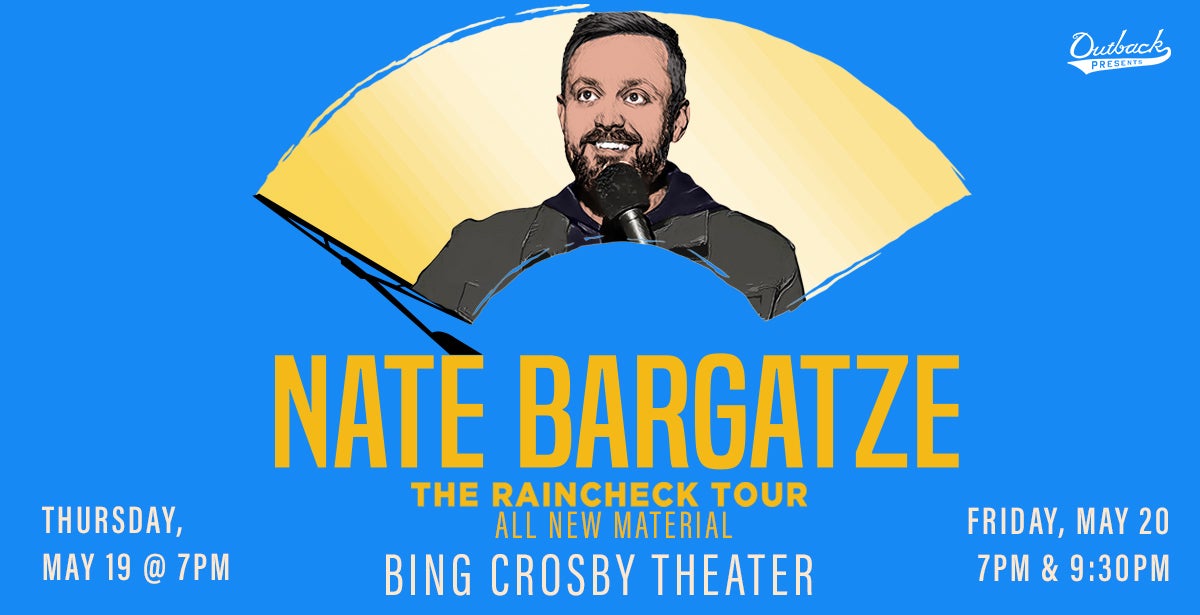 Due to the popularity of this event, a 3rd performance has been added for Thursday, May 19, 2022!

Due to the current global health crisis as well as travel and performance restrictions, Nate Bargatze’s Good Problem To Have Tour has been postponed. This very difficult decision was made following the recommendations of government authorities including the Center for Disease Control to reduce the spread of the coronavirus disease  (COVID-19).  All tickets for the original performances will be honored for the new show date Friday, May 20, 2022 so patrons should hold on to their tickets.  For tour information, please visit natebargatze.com.

LOS ANGELES (MAY 17, 2021) – Coming off the success of his 2020 One Night Only Drive-In Tour, Comedian Nate Bargatze announced today his new The Raincheck Tour which kicks off July 16 in Reno, NV. In addition to his rescheduled shows from 2020 that were moved due to the pandemic, Bargatze has added 15 new markets plus 10 late shows to his tour itinerary.  For rescheduled shows, all previously purchased tickets will be honored for the new dates listed below. For more information and tickets, visit natebargatze.com.

Fresh off the release of his highly anticipated 2nd Netflix special, The Greatest Average American, now streaming worldwide on Netflix, The Raincheck Tour will feature all new material.

In July 2020, the comedian teamed up with All Things Comedy to release his new podcast, Nateland. The world is a crazy place and there's plenty of podcasts out there tackling the tough issues. However, Nateland tackles the meaningless issues that we face day to day to give listeners a much-needed mental break from fighting the good fight. New episodes release Wednesdays, with video available on Nate’s YouTube channel and audio available everywhere you get podcasts.